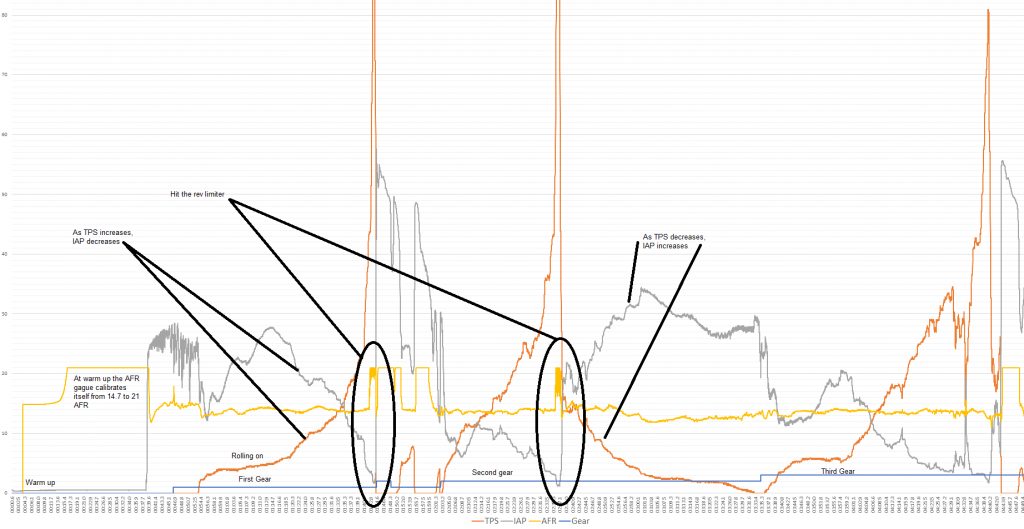 This article was originally posted on the Woolich Racing forums, Sunday 04 May, 2014 6:50 pm

Good data respects you in the morning, bad data…oops, no, sorry, wrong topic 🙂

This article is my attempt to share what’s worked for me with WRT’s AT functionality.

Justin fittingly announced the prerelease of his LBPM (Log Box Pro Mitsubishi) on Australia Day when I was bunked up on a club trip in one of Australia’s “best” motorcycle regions. Only just able to get and maintain reception I put the order through in the very small hours of the morning over what felt like an eternity. I’d been really hanging out for this release having been a previous Dynosaur (in-joke) user on a prior bike.

Before receiving the LPBM I’d used Justin’s mapshare from his own 2013 ZX-10R with a graves full system and K&N filter. This was close to my set up: I was using an Akra slip on with link pipe but OEM air filter. Close but not exactly the same. A good starting point, or so I thought at that time.

When my LBPM arrived I got stuck straight into capturing data and secured 20 MB of data on that first day, 42 MB the next and then 153 MB of data from a “spirited” and lengthy ride. I analysed and used those first two days’ data to fine tune my maps.

On that last ride though I took my trusty workshop laptop with me and at a petrol station in almost the middle of nowhere I fired it up intending to analyse the data from some sections of that “spirited” ride then burn the new map back to my ECU. This is when I discovered that (quite rightly) Justin had secured the WRT software to ensure that folk’s don’t abuse/steal it. Easy. It wanted me to login to my WRT account (first time I’d used WRT on this laptop), this would need Internet access. I can do that. I whipped out my trusty S2 (I know, it’s getting long in the tooth but it works just fine), connected it up then after some mucking around managed to make a hotspot out of my phone and my laptop connected to the Internet, and through WRT I logged in. Excellent. I loaded the data, analysed it, applied it to the map, saved that map then burnt my ECU. Awesome. This is living!

I headed out again with this new map loaded up. The bike felt fantastic. So smooth, it was hard to believe just how smooth. Fluid. Breathtaking. Awesome.

And so over the next few months I captured more data intending to iteratively analyse that data and through it to fine tune my map.

I’d decided on a “best practice”: each map that I built would sit in it’s own folder and under that folder in YYYY-MM-DD format I’d store all the logs which had been captured when I was using that map. I also built some very pretty Excel sheets to compare the previous and current iterations of my maps.

This all went well for some time until I decided to play with the maximum percentage change that AT could apply. I found that I could set it to 50% (from the default of 10%) and while I was at this I decided to employ some of the standard and advanced data filters, enabling the IAP deceleration filter, filtering out clutch in and neutral plus getting nitty gritty and enabling the Exhaust gas Offset feature for time vs RPM.

All good. Well, no, not really.

You see I’d been thinking that all these 10% changes were taking too long and if I allowed a 50% change then I’d get to the most optimum map sooner. That’s not how AT as it currently stands works though.

So the next map I built felt really rough down low. Thinking I’d cocked it up somehow I decided to go back to Justin’s mapshare as a base and then go forwards. Oddly though every time I iteratively analysed my data I found huge changes were needed to get to my target AFRs. Odd. I was feeding in huge data sets of 150-300 MB of log files (that’s a MASSIVE amount of data), I also fed in 479 MB of data expecting the fuelling values to coalesce but this didn’t happen. WRT was still telling me that huge +/-20% to 30% to 40% changes were needed. Hmm…this isn’t good.

Argh. I know what it is. That damn link pipe must be leaking air and throwing the wideband O2 sensor out. After some surgery on my link pipe, and well and truly sealed up, and yes, I’d had block off plates installed since before I started to AutoTune, so I started again with a fresh base map off the graves map.

Still I wasn’t getting data converging. WRT still wanted to see huge changes. I spent a lot of time with Excel looking at graphs and charts of the maps in 3D, looking at % change deltas and generally spending a lot of time trying to find out what was going wrong. About this time I had my first major service and when I picked her up after having the shims measured (there are some things that I just won’t do) I was startled by the mechanic showing me the plugs. They’d got so hot that they were missing a lot of their ends. Not good. Really not good.

I had also realised that to do this properly I needed a realtime AFR gauge on my bike so if it felt laggy or rough I could glance at the display and see what it was doing. So I ordered a “hacker/tweaker” board direct from Zeitronix and spent quite some time building a water resistant enclosure for it when it arrived. To my horror on the first run that night my AFR was going really high at very low revs and the engine struggled, the AFR was 17-20 at the time according to my display and I was still using the throttle albeit very slightly so I felt I had an IAP map problem. I also had a good look at the raw data converted to CSV and there were some really high AFR numbers in there.

I also contacted Justin and told him what was going on. Something I should have done a lot sooner in retrospect.

Justin very sensibly said to go back to a 100% base map, not a mapshare, just a base stock map:

1) Create a new stock bin file
2) Do minimal changes, only make the changes required for tuning and for your bike to run without FI codes e.g. Unify Fuel maps, Disable Exhaust Valve etc, don’t disable fuel cut or apply any map shares etc just use the stock bin file.
3) Log 20 min of data with varying loads including some 100% throttle
4) Send me through this base bin file, and the first lot of data logs
5) Apply the data logs via AutoTune using [u]default values[/u] in the AutoTune settings
6) Send this bin file to me via “Tools”=>”Send Bin File to Woolich Racing”

So I did just that, but with a slight twist 🙂

I created the stock map, made only the changes I had to to stop FI codes appearing then rode for 20 minutes out to a secret off road test area. I then spent the next hour or so very, very slowly rolling on in each gear until the limiter kicked in or I reached 100% throttle, then a just as slowly I rolled off. I did that in each gear wanting to hit each and every cell in the TPS range and as much of the IAP as possible. I then analysed this data and applied it to the map and toasted it back to my ECU while onsite. Then I didn’t do anything at all. I kept capturing data but I stopped iteratively analysing and applying changes to the map. That night I converted all the data from WRL to CSV format and loaded it up into Excel, I then charted TPS, IAP, AFR and gear and because I knew that I’d ever so gradually rolled on then off, I could see exactly what was happening to my AFR: 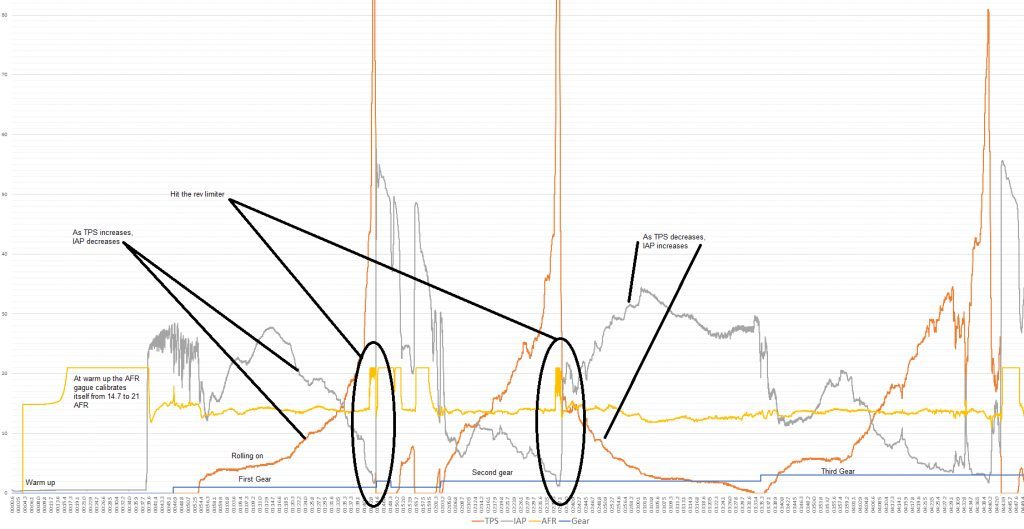 So what have I done since then? Nothing at all. My hacker/tweaker board shows me that the vast majority of the time I’m in the 13.2-13.8 range with the throttle applied and now I understand that the AFR will go sky high if I change gears, roll off etc. That’s just the way it is. And AT? I’m no longer trying to get the “perfect” map. The one I have now is damn fine.

Sure I have lots of questions still about the interaction of the various filters and advanced filters but I’m no longer capturing data and spending hour upon hour iteratively making maps.

So, what should you ideally expect to see in terms of hitting as many of the cells as possible? Here are the IAP and TPS cells I managed to touch while I was at the secret off road test area (if you click on the first image it will open fully and you can see the extreme right hand side of the image). 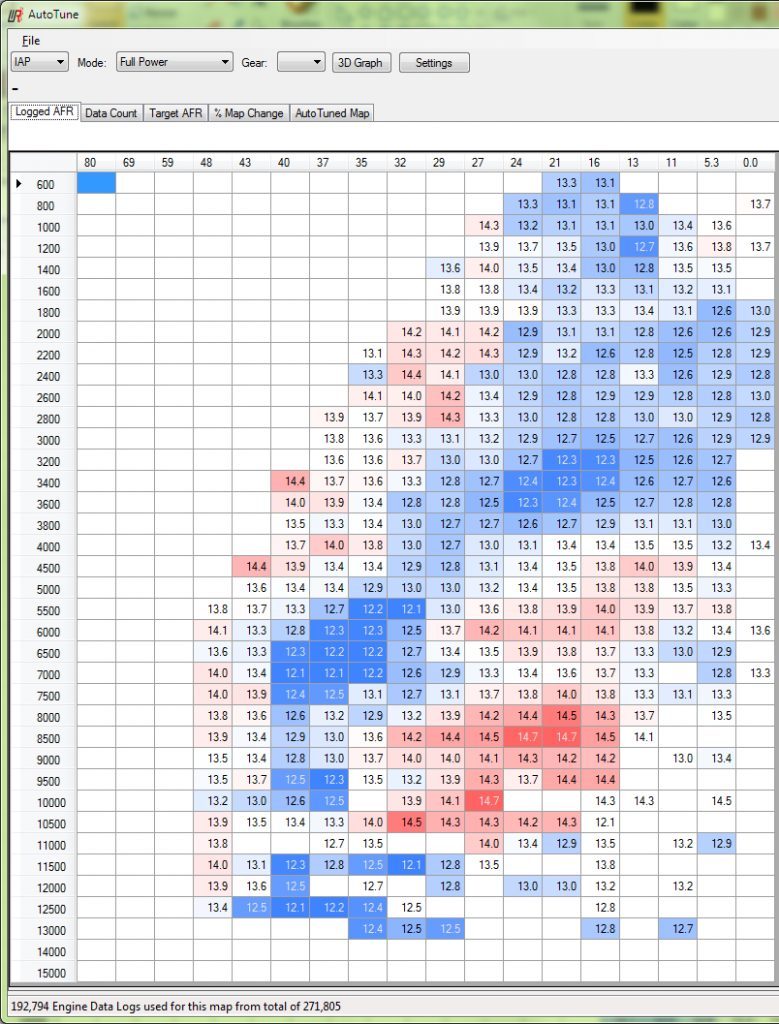 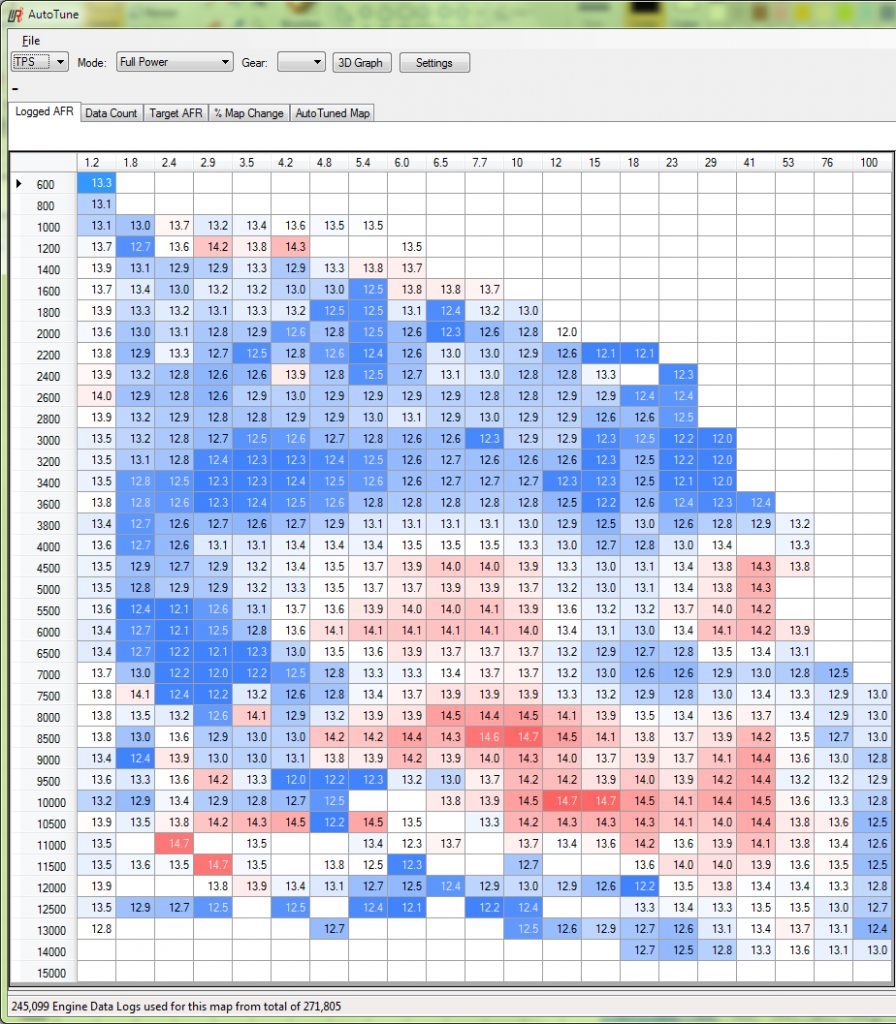