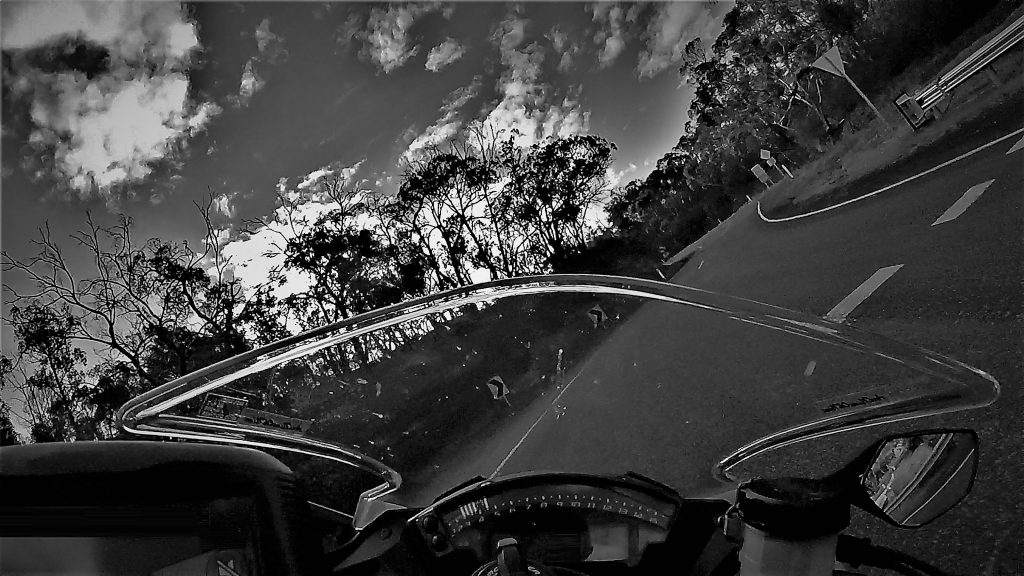 Eager expectation, that’s how I felt the morning of the ride. The day was overcast with the threat of hail in Melbourne that afternoon and a cool 10C forecast for part of the ride. Finding the meet point was a challenge itself, there being no actual Shell service station in Point Cook, with some google-fu prowess I took a punt on the meet point being close to Point Cook Road on the Westgate. Success! I see a group of bikes as I pull into the servo and fill up to the very top of the tank – I’m now wise to this requirement. A quick briefing, some warnings about the exit path and the infamous double roundabout which makes corner marking an art form and we’re off to meet Bill and Cliff in Anakie.

Scooting down the back roads to Anakie I spy the solitary You Yangs recumbent on the plain, this is an area I know well so I’m intrigued and full of expectation of what routes are in store for us today, this being my first Meredith ride with this group. I’m always suitably impressed by riding with this crew how even somewhere I think I know well delivers new roads. Bill provides a thorough briefing complete with printed notes and sure enough within minutes of leaving Anakie we’re taking a turn off the main road down an innocent looking track, then the fun begins, ascending a few tight twisties through the gum trees and I’m off into the unknown.

During the briefing Bill mentioned that we might notice ourselves traversing the same roads, but in different directions. I counted one particular intersection at least three times and was only alerted to this by an ominous looking car with tinted windows parked adjacent to the bitumen, on the first pass I considered it to be a frumious Bandersnatch, after which I couldn’t get lines from Lewis Carroll’s The Jabberwocky out of my head for quite some time. After loops within loops through Maude and Steiglitz we arrive at Meredith for a quick break, some shunning fuel, some requiring coffee and a first breakfast for some.

Our second leg took us through She Oaks, Maude, Lethbridge, Teasdale, Shelford and with a quickening pace on some excellent fast sweepers we arrive at Inverleigh for lunch. Munching on lunch whilst ruminating on the generally good state of the roads with the surprisingly decent weather and we espy a real life Bandersnatch. This took the form of Vic’s Finest who’d stopped for a bio break and then headed off down a side road. The warm sunshine abated and gathering dark grey clouds threatened. On with the wets and we take off on the next leg.

From Inverleigh we track through Teasdale (again, but in a different direction!) some light rain making the going more interesting and we then make a mid-afternoon pit stop at Bill’s house in Bannockburn. Plates of dark and milk chocolate biscuits and assorted nibbles are conjured up, tea and coffee proffered and the man cave is opened up. Much admiration is garnered for Bill’s unique gas cylinder conversions and then we’re off again.

Through Maude for the second or third time, again in different directions, we wend our way through to the Anakie Junction across Staughton Vale back towards Little River and finally land at the Werribee Caltex.

Highlight of the ride? Bill motioning and pointing to his tank mere kilometres from the finish line. What shortly follows in a blur of motion is the fastest appearance of a length of plastic tubing, an empty drink bottle and an adroit syphon. In the time it took me to remove my wets Simon is looking at me as the rest of the crew is astride their mounts and taking off, just up the road a small boy is waving with a proud mum and dad admiring our departure, I cheerily wave as I pass and hit the rev limiter for good measure. At the Werribee Caltex Ben is overheard saying that his fuel economy is now so good that he carried enough fuel for two bikes.

Many thanks to Bill for his hospitality and especially the dark chocolate biscuits.